I have found the place that I will retire one day when I am a crone. It is a place of storybook-esque buildings and incredible ocean views, bountiful art galleries and amazing people. That place is…

What an amazing little place. We really didn’t intend on staying here but we had so much trouble finding a place to sleep in San Simeon that we ended up moving South in order to find lodgings and WiFi. We spent a few hours exploring the area before spending a night on the side of the road. The next morning we hopped from cafe to cafe in search of WiFi so that Eli could work but were having a difficult time. It wasn’t until Eli spoke to his mom that we found out that there was a cousin in Cambria who was willing to give us a place to hang out and work for a few days. It was the luckiest and most coincidental event I have ever experienced.

So, we made our way to Lady Tie Di’s house, a beautifully eclectic little home that sat above the rest of the town. We spent our days working and cuddling her three kitties and the evenings we went on adventures and got amazing food and talked well into the night. The first night that we stayed, Dianne treated us to an amazing dinner at Robin’s. The restaurant itself was gorgeous, with thick vines growing through the walls and tables decorated in mosaic tiles. The food, on the other hand, was painfully good. I don’t think you can possibly order a bad meal there. The way they were plated was bordering artistic and there was a wide variety of multicultural dishes from curries to lasagna… Both of which we ordered and thoroughly enjoyed. I give it 10/10 good foods.

The day after, the three of us went sight seeing in San Simeon and Big Sur and saw some incredible views off the coast. The drive was about thirty minutes of more rolling hills and oceanic coastlines, along with some wild elk that roam the area. Our first destination was Ragged Point, a lookout spot high in the mountains. It was an awe-inspiring sight with a spot that leaned over a cliffside and overlooked a long stretch of mountainous land that touched the sea. I couldn’t keep my eyes off of it. 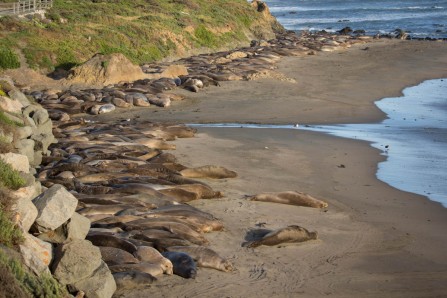 We spent some time taking photos and then ventured on to San Simeon to see the elephant seals. That was an experience. The weather was freezing yet there they were hundreds of giant seals lounging in the sun. Most were sleeping but we caught some flopping their way to the sea and others fighting for good napping spots. They were pretty cute but they made the nastiest sounds. It was a cacophony of burping and farting and snorting sounds which we were finding particularly hilarious because we are 12-year-old boys. Apparently, during this time of year, only female and adolescent seals are on the beach, but during the winter the massive adult males arrive. During Road Trip Round 2, we plan on going back to see them.

The last day in Cambria was spent exploring on my own. I spent hours perusing antique store after antique store along with gorgeous little boutiques and an herb store that had the most incredible fairy garden out back. I took an obnoxious amount of photos that I will probably use as inspiration for my garden someday. Other than that, I spent more money than I should have on old Teen Titans comics and handmade yarn that will be used to make a hat for Yosemite.

We left that afternoon with heavy hearts, knowing Diane’s cats would only have one person to pet them instead of three, which I’m sure is just a travesty to them. Within the span of two or three hours, we found ourselves in Fresno.

We were very fortunate during the week when we stumbled upon a Couchsurfing host, Jameson, in the city that was willing to house us for a few days before we went on to Yosemite. Our instructions were to meet him at the gym where he teaches yoga, which we did. We were welcomed with big hugs and then promptly ushered in to a yoga class that we were not only late to but also woefully unprepared for, considering we were both wearing skinny jeans. Our host’s girlfriend, Kellee, was teaching the class and let me tell you, she kicked my butt. I believe the class was Power Yoga but I may be mistaken. It was a great time though. I had forgotten how much I love yoga and just how much I had missed it. Kellee’s class had me feeling graceful and powerful and very inflexible. I curse the day I stopped stretching in the mornings.

After our class, we had dinner with Kellee and Jameson and it was a great time. We basically told them our life stories and they hung on every word. I don’t think I’ve ever spoken to such attentive people in my life but it certainly made me feel special. We had great conversations about traveling, veganism, and relationships until it was late into the night.

The rest of the week consisted of working and a mad attempt at trying to plan things for Yosemite. Here’s a little tip for all of you reading this; don’t try to plan a trip to Yosemite last minute, it’s a damn nightmare. More on that later.

Our gracious hosts apparently do yoga and fitness training all day long. I believe they said that they do around four yoga classes per day as well as general body conditioning. It’s a real mystery as to why they have perfect bodies and are really really good at fancy yoga moves. Anyway, they invited us to attend their classes every day that we were there, which we obviously agreed to, which is how we ended up in hot yoga. 100+ degree, 80% humidity, and a room filled with people working out. Eli signed us up for that one, surprisingly. It was a pretty gross feeling, to say the least. I didn’t think that I could sweat like that but there I was in Downward Facing Dog with sweat dripping off of the tip of my nose. Despite the nastiness though, it really left me feeling very awake and accomplished. The experience was something that I never thought I would do and here I was, keeping up with the class and not passing out! So, needless to say, we enjoyed every slippery, smelly minute.

Other than the classes though, we really didn’t have much time to check out Fresno. I spent a little time walking around when I was picking up lunch for us and from what I could tell, it was a nice area to be in. There were some beautiful northeastern looking houses and some fun little stores in a downtown area. Restaurants were bountiful and completely unique. We went to a place that only made fancy quesadillas, which was pretty rad. Also, from what I understand, living there won’t break the bank, unlike the rest of California. We had a good time. Although we left sore in every part of our bodies, everything was fine. Everything is fine. Now we are off to Yosemite.

One thought on “Cambria, California”