After we said our goodbyes to Lance, Jed, and all eight of their pets in Chico, we climbed back into the van and headed up the Skyway towards another cousin of mine in Magalia.

I hadn’t seen that part of my family since around 2009 or thereabouts so we had a happy reunion and caught up. Brooke and I enjoyed the extremely fresh at their little estate in the woods overlooking seven acres of gorgeous forest that surrounds a stream that runs through the area. It was an odd experience feeling like you were so secluded just to realize you’re only a short drive back into the city. Between work and conversations, we discovered my new favorite full-contact sport: Prison Hummingbird Aerial Death Battles. Although all the hummingbird feeders they have on the house are regularly refilled, these little guys seem to be under the impression it’s a cutthroat business. There was constant competition over sugar-water real estate. Between racing around the property to the different feeders, dive bombing each other, and chasing one another away, there were some brief intermissions to actually eat the food. I was able to get one respectable shot of a ruby-throated hummingbird before he rejoined the fray.

Ruby-throated hummingbirds are actually born white but become stained this brilliant color by the blood of their enemies.

Magalia is a small town though and we were only around for two nights so there were no shenanigans to pursue. Friday after work, Brooke and  I once again said our goodbyes and headed to our next destination, Westwood.

The north face of Mt. Lassen, as seen from near Westwood.

We were only in Westwood for a short time to visit an aunt of mine who recommended we checkout out some popular local scenery. We were blown away by these incredible places.

Talking to locals and always accepting recommendations has become a staple element in our agenda. We would never have visited even half of the places we have so far if it weren’t for our fabulous improvised tour guides. My aunt suggested Subway Cave and we were absolutely amazed by it. Subway Cave is a 30,000-year-old underground tunnel that lava used to flow through when the volcanoes in the area were active. It’s only .3mi long but the tunnel achieved a level of pitch-blackness unlike we’d ever experienced and it was probably 20-30 degrees colder than on the surface.

Seeing sunlight again was a warm welcome. Get it? Warm? Sunlight?

It was a frightening experience to turn around and see absolute nothingness (which no amount of cellphone flashlights can fix) but it’s fortunately too short for us to get lost in. After walking the entire distance with some visitors, we returned on our own and departed towards the next scheduled item.

I wouldn’t describe this as a hike, but there is a steep walkway that takes you to the pond underneath Burney Falls. You’re allowed to swim in it but we decided to pass after estimating the water was too cold to support human life. We toyed with our cameras and took in the scenery and the noise of the waterfalls. I got experimental with some daytime long exposures and I’m proud of the results! 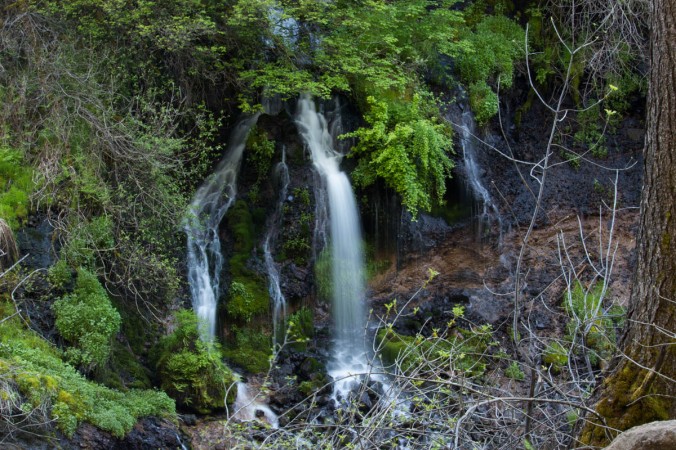 By the time we were done with all this, it was late Saturday night and we had settled down in Medford, Oregon. We were exhausted and had only made it halfway through the weekend! With plans to see Redwood National Forest on Sunday, we couldn’t allow ourselves to slow down. Even though we were too excited to sleep and too exhausted to stay awake, we got some good sleep that night and everything was fine.