It is work day in the Greene/Nichols van household so I am finally taking the time to update you all on our current shenanigans as I finish my breakfast and morning tea under the cloudy Washington sky. About a week and a half ago, we meandered into the Seattle area after some time in Olympia. We were fortunate enough to have been invited to stay with an old friend of Eli’s, Summer, who gave us a place to park our van-house and offered to show us around the city over the weekend. It was a very exciting moment as Eli and Summer reunited again after years of not seeing each other. There were big hugs and lots of reminiscing about school and old friends that went on into the night.

Our exploration of Seattle began the next day with our first stop at Troll Street, where we became acquainted with the Fremont Troll. In 1989, artists were tasked with the project of filling the space under the bridge with something imaginative and unique to reflect the Seattle culture. After seven weeks the troll came into being, complete with a dilapidated VW Beetle in his fist and a shiny hubcap eye. We joined a hoard of tourists who were crowded under the bridge for photos and tested our climbing skills as we scrambled up the troll’s head for a picture. 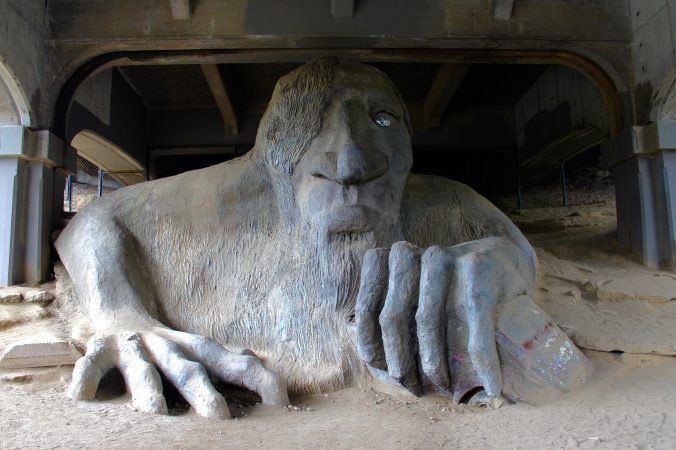 From there, we made our way to yet another uniquely Seattle experience, Gasworks Park; a 19 acre public park that sits on the coast of Lake Union. This is far from your average park though, as it is dotted with enormous industrial machinery from a bygone age. Walking up to it felt like entering a post apocalyptic movie. Rusted metal towers stood ominously against the city skyline with moss and vines creeping up their sides. It felt almost eerie to be in such a beautiful place, surrounded by a well manicured park and a shiny city skyline juxtaposed with these worn down mechanical remnants of an old oil factory. We explored the park, making sure to climb on as many giant gears and mechanisms as we could, and got an amazing view of the city skyline, a harbor, and the lake from the top of a massive hill, which we later rolled down.

From there, we made an attempt to see Pike Place Market but it was unfortunately closing up by the time we reached it. Instead, we settled for some dessert and a ride on The Great Wheel, a ferris wheel that dangles you out over the ocean on Pier 57. It was a bit unsettling but we did get some amazing views of the downtown area as the sun was setting. Afterwards, we got to enjoy some local performers who were participating in what seemed like a dueling wind instrument event, and they did not disappoint. These people were amazingly talented and fun to watch as they jammed out together and ran through the growing audience, clearly enjoying themselves and their music. It was nice to see the local music scene and to see people perform so passionately and have so much fun with what they were doing. I think it was a great example of what Seattle has to offer as far as the local scene is concerned.

After our great adventures, we decided on a movie night and all four of us (Summer’s boyfriend, Anthony, included) huddled into the van-house for some Teen Titans and Wanderlust. At one point we even broke out our camping stove for s’mores, which were a little too stale to enjoy but made for a funny memory. It was a great ending to a great day.

On Sunday Eli and I set off on our own to see how much we could fit into one day. I was determined to give Eli the full Pike Place Market experience since we didn’t get the opportunity yesterday so that was our first stop of the day. We bought a day pass for the bus and made our way into the cloudy city. Pike Place was in full swing when we arrived. Tourists crowded the vendor stalls that were filled with amazingly colorful peonies, crafts, fish (of course), and the most beautiful fruits and vegetables that I had ever seen. We spent hours wandering around and perusing book stores and spice shops, trying hard to remember that we have limited space in the van so buying one of everything would not be smart. We settled on a father’s day gift and some amazing chocolates before leaving to wander the city.

Seeing as it was a Sunday, we had some trouble finding things to explore later in the evening as storefronts and museums began to close their doors. We managed to find a couple things to enjoy, including a Microsoft store, Cow Chips Cookie Company, and my personal favorite, Spooked in Seattle. Down a dark stairway lies a wonderfully spooky little shop filled with all of my favorite things; skulls, bats, victorian era decor, and all things witchy. Spooked in Seattle is typically a museum/ ghost tour facilitator that offers psychic readings, paranormal investigations and tours, ghost hunting lectures, and even shotgun weddings for the more creepy inclined. Lucky for us, we arrived on the first Sunday of the month, meaning we got to enjoy the Metaphysical Market. Here local vendors got to sell their New Age type wares, such as stones, pendulums, and tarot cards. We also decided to partake in the Museum of Death, which ended up being a small, two room setup filled with Victorian postmortem photos, mourning attire, mortitian equipment, caskets, and skeletons. The rooms were dimly lit and painfully ominous so we were definitely feeling super creeped out. Eli won’t admit it but I firmly believe there were some ghostly presences lurking around, adding to the morbid atmosphere. 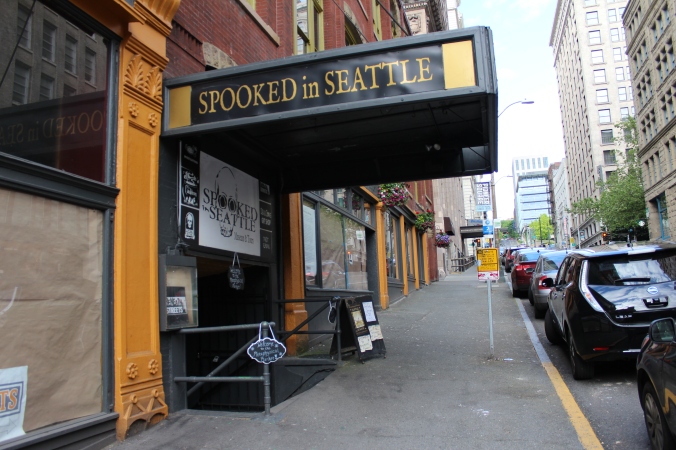 Our weekend in the city concluded with the museum so from there, we made our way back home. Luckily, we got to experience the nicer side of Washington weather but our time here is far from over, after a short journey into Olympic National Forest we will end up back here to see a few things that we didn’t get the chance to check out during our short time.  But as always, everything is fine and we will update again soon.

One thought on “Seattle; Part 1”