After many long awaited months, we finally got a dose of home away from home when we got the opportunity to see our dear friend, John. His typical summer schedule usually includes a long stint on the more eastern side of Michigan where a lot of his family resides which is where we were headed next. So, without further ado;

This was technically taken in Detroit but we didn’t take any good pictures in Lapeer.

Leaving from Daureen’s, we found ourselves just north of Detroit in the small town of Lapeer. John and his brother acted as our gracious hosts for the weekend and John toted us around the area, being sure to give us an authentic Michigan experience. Lapeer itself didn’t have too much to offer us aside from a really fun antique store and some Superman ice cream, which is only a thing in Michigan and will turn your tongue various colors. We spent a couple days hanging around that area, meeting up with some of John’s good friends and playing card games well into the night.

Saturday was spent enjoying the city of Detroit, which has apparently been making quite the comeback. Like most, I had only ever heard of the dangers that occurred in the area but the city really seems to be reclaiming itself with new stadiums, trendy restaurants, and renovations around every corner. We did some walking, stopping to yell obscenities at the Canadians across the Detroit River, marveled at the Joe Louis Arena (may it rest in peace), and grabbed drinks at a few different bars along the way. We had plans to go to a baseball game in the city and on our way, we made a food stop at one of Detroit’s most popular Greek restaurants, The Golden Fleece. The restaurant itself was bustling with people, making for a bit of a crowded atmosphere which can only be indicative of one thing: great food. And great it was. We started off with some flaming cheese as an appetizer and from there moved on to gyros and spanakopita and it was so damn good. Easily the best Greek food I have ever had in my life.

So, after gorging ourselves on amazing food, we walked to Comerica Park where we watched the Tigers destroy the Astros in an amazing game that we were convinced was going to be a losing one. The stadium itself was really enjoyable, too. There was so much to see, including a carousel that only had tigers to ride on, giant stone tigers that decorated the entrance, and a baseball ferris wheel. I’ve only been to a few stadiums in my time but that one was by far the coolest. 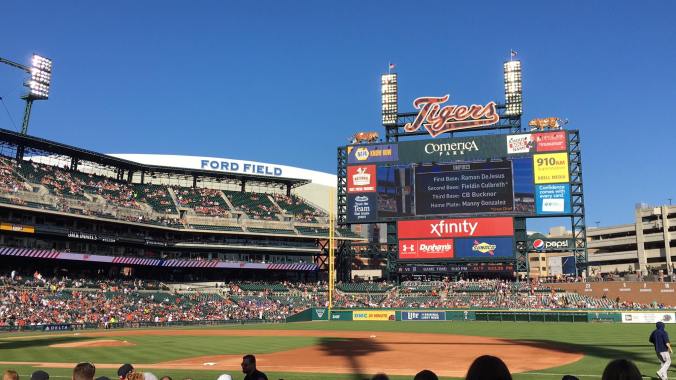 In the days following, we ended up hanging around the Lapeer area while we waited for some mail to arrive. We went about our daily practices; sleeping in a Walmart parking lot, showering at Anytime Fitness, and working at Starbucks. Everything was just as it had always been on our trip so it came as an absolute shock to Eli and I that I would be stricken with severe panic attacks out of the blue.

I had had panic attacks a couple other times in my life but they had occurred years ago and so infrequently that I really didn’t think much of them. They were frightening and upsetting but they were nothing compared to what happened in Lapeer. I don’t want to go into too much detail but it was multiple days in a row of attacks, one of which I made Eli call paramedics because I thought I was having a seizure. It was unlike anything I had ever experienced but it brought some things to my attention that I think would be important to address for people of the van life community; dealing with mental health on the road. I am by no means an expert on the subject but I would like to share what I do know and how I deal with my demons while traveling.

But I won’t do that here. It will be in the blog posts to come.

To wrap up our final Michigan post, we had a great time despite the scary bits. Michigan is beautiful and we really enjoyed our adventures throughout the state. From here, we finally make our way to New England and reach the halfway mark of our trip! We are still going strong. Every day is a new adventure and even though we had had to deal with some really difficult realities, everything is still fine.