Look at me, getting caught up on the blog posts! Believe it or not, you are actually reading a post about where we are right at this very moment….well, at least until tomorrow (No longer true, now it’s two days late. Sorry, not sorry). We are currently in Virginia but when we left Philadelphia on Labor Day, we decided to spend our day off in the United States Capitol. 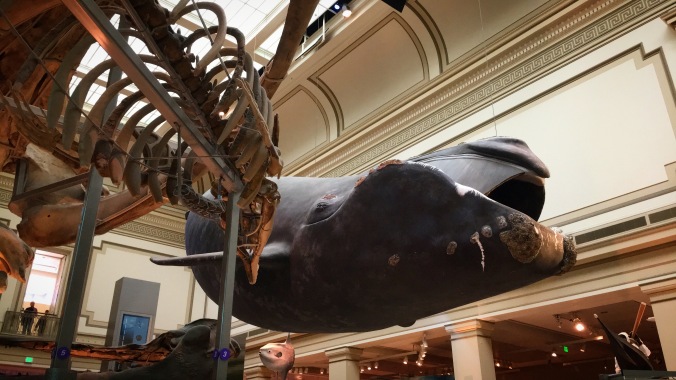 We did a lot of commuting over the weekend as we went from Hershey to Philadelphia to Delaware (for a quick shower) and then into D.C. where we parked the van and took a train into the city. Our priority destination was the Smithsonian Museum of Natural History so that was stop number one for us. To my surprise, that museum, along with the associated museums in the area, were all free. After visiting other museums and spending a small fortune on tickets, we were very excited. Just as we have done in those various other museums around the country, we spent close to five hours there.

The most memorable part for my was the ocean exhibit that took up most of the second floor of the building. There was so much to see and learn about so we were like kids in a candy store. Perhaps the best part was that the Smithsonian has no chill when it comes to climate change and human impact on the world’s oceans. Almost everywhere you looked, there was information on coral reef destruction, pollution, over fishing, trash, coral bleaching, etc. It was awesome. There was no way you would be able to get out of there without having some form of knowledge on the impact we are having on the planet.

Further exploration brought us to an exhibit all about narwhals, complete with sea unicorn lore and a horn that you could compare your height to. We also got to see the Hope Diamond, real Egyptian mummies and sarcophagi, and sooooo many skeletons of every animal variety. Also, if you’re into lavish gems and jewelry, you will enjoy the Natural History Museum because they have a wide variety of some of the world’s prettiest sparkly bits. I’m not even into the expensive and obnoxiously fancy jewelry and I was still starstruck.

We ended up staying until it closed so we unfortunately didn’t get the opportunity to visit any of the other factions of the Smithsonian. The original plan was to try and visit one of the art museums that were featuring artwork from Ai Weiwei as well a Yayoi Kusama, two prolific 21st century artists. We were also interested in seeing the Air and Space Museum as well as the Smithsonian Castle because who wouldn’t want to visit a castle, right? Oh well, they will have to wait until Big Ol’ Road Trip Round Two.

Since the museums were all closing, we made the obvious choice to go visit the monuments to American government. We walked eight miles going from the Capitol Building to the Washington Monument, then we summoned our strength to walk to the Lincoln Memorial and then to the White House. A word of advice; don’t go see the White House unless you’re taking a tour. It’s blocked off by about seven different gates and barriers and the view is obstructed by trees for the most part so you really don’t get to see much either way. We had been debating on whether or not we even wanted to go because by that point we had been walking all day and were completely exhausted. Turns out, it’s not worth the extra two miles that it added to our route. 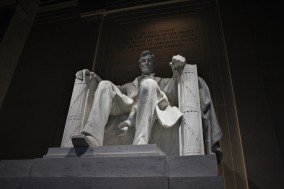 The Washington Monument from a distance.

We ended up leaving Washington D.C. late in the night and made our way into Virginia to stay with some of Eli’s family and have been here ever since. It has been a huge work and hurricane watch week for us with some movies and playing with the adorably inquisitive three year old of the house. Hurricane Irma has been slowly gaining severity over the past week, causing us great concern. We have been getting the play by play from Eli’s coworkers on the eastern coast of Florida and it has not been looking good for them. Most of them evacuated but a couple stayed to brave the oncoming terrors and we were met with a new set of things to consider: how do we deal with natural disasters on this trip?

We have been lucky to have encountered mostly pleasant weather so far but now that we are met with the country being torn apart by wildfires in four western states, the biggest state underwater, and many eastern states currently preparing to be torn apart by hurricanes, we have no choice but to ask some big questions. The immediate thought that jumps to our minds would be to just drive away from danger, but with a schedule to keep and work to worry about, it gets a little tricky. We were fortunate to be in the vacinity of many family members and friends during this time so we have been able to wait things out to see the path that Hurricane Irma and even if we weren’t we made plans to evacuate to Pennsylvania and stay with friends until the problem went away. At this point, it looks like we will be far away from the destruction of the storm so we were fortunate. Hopefully we won’t have to deal with any more natural disasters on this trip because if we get stuck in a storm, the van won’t do much to protect us. As of right now though we have a plan and everything is fine.

One thought on “Washington D.C.”