What was that we said about staying on top of our blog posts? Oh that’s right, something about not procrastinating for an entire month. Oh well, we did our best. Sort of. Okay, not really.

Anyway! We are currently freezing our butts off in Colorado and making our way towards Utah but we do have some catching up to do so I’m just going to rewind a little to when we could wear t-shirts and go hiking without freezing to death.

I didn’t think I would be able to enjoy anything in Texas. All I had ever known about it was that it was big and cowboy-ish. I was prepared for lots of barbeque, cattle ranchin’, and pickup trucks but Austin was…different, to say the least. We stayed for just one weekend and made sure to experience it to its fullest.

Eli has some coworkers who live in the city so night one consisted of meeting up with them for an introductory tour of the downtown area and an amazing dinner at a restaurant that I don’t remember the name of but thoroughly enjoyed. We also took a minute to enjoy some of the wonderful murals that litter the city and check out the pink granite of the capitol building from afar.

Day two we decided on an adventure. My constant perusing of Pinterest finally paid off, much to Eli’s dismay (he hates Pinterest with a burning passion. Especially when I use it for trip planning). We found ourselves, along with Eli’s coworker, Joe, in Hamilton Pool Preserve. The Preserve a really beautiful natural pool shaded by a box canyon. It came into being thousands of years ago when an underground river collapsed due to massive erosion. A lot of the time it has a waterfall that flows into it overhead but it had slowed to a trickle at the time we arrived. It was definitely one of the cooler hikes we have done so far. I can’t really find the words to describe it. It was like a little swimming paradise had formed in a giant crater. The rock formations were really unique, too. Climbing behind the waterfall gave a very cave-like feeling but it was all overlooking this bright blue pool that was surrounded by trees and sunlight. We also got to enjoy a scary little snapping turtle who we found chilling out under the water. Every time we turned our backs to him, he got closer. I think he wanted to make friends but I was assured that that was not the case.

The Preserve is also connected to another really enjoyable hike that ended up taking us throughout the surrounding wooded area where we continued to climb all over giant rocks and photograph little streams and pretty trees, as per the usual. The weather was perfect and we ended up spending hours just wandering around in nature before making our way back into the city.

With touristy things on our mind, we found ourselves at the capitol building, which is quite unique, as far as capitol buildings go. Apparently that part of Texas has a surplus of pink granite so of course the city took full advantage of that fact and made the entire building a giant, pink monolith. We did a self guided tour through the inside, which ended up being very impressive. Once inside, you can look up into the inside of the domed roof and then make an ascent to the other floors which have circular balconies that overlook the state seal that has been laid into the floor. Certain rooms had been decorated for the holidays and all were lined with historic artwork depicting wars, state senators, and other influential people. It is also worth mentioning that the Capitol Building has a parking garage that is relatively inexpensive and sometimes even free during certain events, which comes in handy when you realize you have to drive your own car around the city because Uber and Lyft were sort of, kind of outlawed in the area. 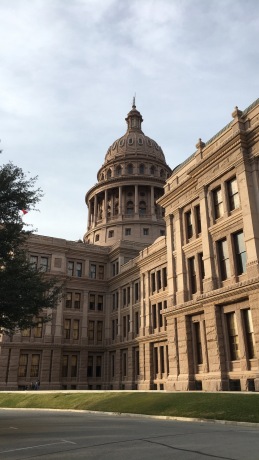 The night went on as we began to wander the streets surrounding the area. Austin has a huge music scene so every bar that we walked past had music flooding out of it. We even found ourselves in a music store that had a live-in cat, whom we thoroughly enjoyed.

Our wanderings took us through the more popular and “happenin'” streets of the city, eventually bringing us to a place that we encountered towards the beginning of our trip in Portland. We had reached a peak in our hunger and upon searching the interwebs for good places to grab a bite, we discovered that Austin has a Voodoo Donuts. Of course, we made a beeline for the store, stopping for nothing and no one. The store itself was a lot cooler than the one that we had visited in Portland. For one, it actually had tables to sit and eat at, unlike it’s counterpart that was just a counter for ordering. On top of that, the place was decked out in really cool murals, one of which spanned across a gigantic wall and was made entirely of duct tape. We decided on three donuts this time (because deciding on just two was never going to happen) and ended up with the Gay Bar; a cream filled vanilla bar with the most rainbow of Fruit Loops on it, the Matthew Mathers; if you couldn’t figure it out based off the name it was covered in M&M’s, and the Butterfingering Donut; a chocolate glazed covered in Butterfinger. I had forgotten just how incredible they were until we dug into our assortment. These really are the best donuts EVER and no one can convince me otherwise.

From there, we made our way back to the Capitol Building where a festival of sorts was being held, to our surprise. Somehow we happened upon a Christmas tree lighting ceremony that was complete with aerial silk performers, vendors, musicians, animal rights activists, and some awesome vegan food. It ended up being a very happy accident as we mingled with the locals and cheered alongside everyone as the tree lit up in festive colors and patterns. After such a long day of exploring, we headed back to our home away from home, a Walmart parking lot, and promptly went to sleep so that we could be well rested for our trek to Eli’s home lands, Arkansas. And while this post is extremely late, we are still safe and having a great time in the finally leg of our trip so everything is fine!