Ah, to be in the land of my people. We got out of Austin just days before an unexpected snow hit them and traded that for some even colder but weather in my home state. We spent the entire month of December visiting my family and childhood friends, most of whom I hadn’t seen in about four years. We made our first stop along the south central border of the state.

Spoiler alert: We only visited one friend here and we didn’t take any photos because we were only at their house and the town itself isn’t at all exciting. I certainly wouldn’t want to violate anybody’s privacy by describing their personal life on the internet so we’re going to move right along.

After our brief stay in El Dorado, we drove through the state capitol and stopped just past that in Conway, the other *other* college town that Arkansas has. I had never been to Conway but a couple of my friends had moved there and we were pleasantly surprised. It was a relatively quiet town with some cute little restaurants and lots of places to relax. We met up with two of my friends in the two days that we were there and had tons of catching up to do. While we had a really great time chatting, Brooke and I would soon find that we would be facing our coldest night in the van yet. The temperature got down to a frosty 7 degrees Fahrenheit and was not an experience I remember fondly. Not one of our four layers of blankets or our thermal pajamas would be sufficient for keeping us warm that night. We managed to survive the night but resolved to implementing a better response to the cold weather soon.

Sunset in Mountain Home, AR in December, as portrayed by a cellphone from a parking lot.

Unfortunately for our resolution, we wouldn’t be sleeping in the van in my hometown! With the half of my extended family in Arkansas offering us places to stay, we were treated to readily available beds and heated houses to occupy during our holiday visit. I showed Brooke the areas I used to see a lot of during my childhood, which was surprisingly little because the town is so small. We stayed with my grandma mostly but also visited with my aunts and uncles and cousins and generally had a great time! We were pleased to be out of the cold but still had some driving left to do!

Fayetteville is my favorite place in Arkansas and it’s where I last officially lived before going to Nevada and afterwards starting this trip. Brooke and I broke our time in Mountain Home in half with a break to be in Fayetteville. Brooke had visited once in the past with me so we jumped right on hitting up our favorites spots. Several more of my friends live in Fayetteville so we made some plans with them too and wound up staying with one of them too. I will admit it was nice to not be relegated to the van for the full duration of the winter. And, as if we hadn’t done enough of this yet, we had somewhere to fly for a few days.

I had a work party to attend and they were kind enough to fly us from the Bentonville Airport out to Florida for a few days so we wouldn’t miss it. How fortunate we are to be associated with such awesome people. We loaded our backpacks and traded our cold nights for warm beaches for a couple of days. That trip was short lived though because we had a schedule to keep! 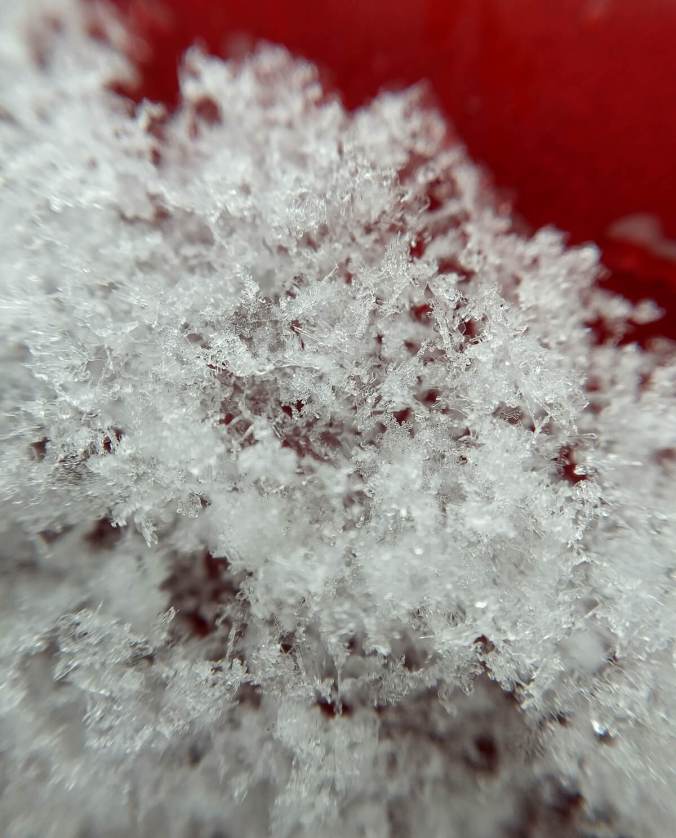 Supermacro of some snow on the van that we got while in Fayetteville.

We flew back into Fayetteville and stayed one more day before driving back to Mountain Home to spend Christmas with my family.

We spent Christmas with my family and stayed a few more days to say our goodbyes. For Christmas, I got Brooke a makeup palette she had been eyeing (Naked Heat, for the curious) and Brooke gave me a scarf she had crocheted just for me. We also tried to have a mechanic diagnose an issue we had been experiencing in the van but mechanics in small towns are in short supply over the holidays and we didn’t want to wait around too long.

Could we have fragmented this section of our trip any further? No? Are we good? Thank goodness. We spent the last days of our December in Fayetteville. We had originally intended to get some hiking in because the Ozarks are legendary but it turned out to be a little too cold for that. Instead, we agreed to trade hiking for the Crystal Bridges Museum of American Art. It, like everything else in Northwest Arkansas, is funded by Wal-Mart money but was an incredible experience. We moved from room to room looking at all the paintings and art installations, some of which here hundreds of years old and all of which were originals. It was… Impressive, to say the least. They even featured hyper-realistic human models made with silicon and painted to look like skin and furnished with actual human hair!

On New Year’s Eve, we celebrated in the cold with the rest of the city at Last Night Fayetteville, an event thrown every year by the city that takes up a total of ten stages in three buildings and occupies the entire Town Center building. They cycle acts out on all stages through the evening and feature music, comedy, poetry, and other artistic performers. At the end of the night, they do their own version of the Time Square Ball Drop, featuring a light up pig instead by virtue of Fayetteville being the home of the Arkansas Razorbacks. Our shenanigans finished, we had a place to stay one final night in Arkansas and took our leave the next day.

Another place I lived during my formative years, we had a long-time family friend to visit while we were in the area. Brooke got another tour of another small town from my childhood and we were treated to such delights that included but were not limited to baby goat faces since the friend we were visiting is basically a farmer.

That’s not the friend we stayed with. That’s Blossom.

We have been feeling the urge to finish this trip so we didn’t stay too long in Kansas. Our next destination was Denver and we wanted to see it before the winter weather made it inaccessible to us. However, we did take the time to put together a solution for the cold weather though. We figured that an electric blanket would be a good purchase since we have the inverter and battery and a down blanket that we use as our insulating layer. Unfortunately, the blanket we bought didn’t work in the van. We learned that the inverter we have produces modified sine wave power and that some electronics need pure sine wave power or else they’ll start fires. Thankfully our blanket didn’t do that but we had started thinking that maybe being on fire wouldn’t be as bad as freezing.

Instead, we traded the big 110v wall plug blanket for two smaller 12v car socket blankets. I also had to install 12v adapters onto our second battery since there would be in buying wall adapters for the inverter and stepping up to the 110v just to step back down to 12v. Connectors in place and blankets plugged in, we tested them and were pleasantly surprised by how warm they got. Just to be sure they would last through the night, I did some math and compared the power draw of the blankets to the capacity of the battery and found that, with both of them turned on low, we should be able to get at least 8 hours of use out of them (which has held true so far!).

Our worry of single-digit temperatures appropriately conquered, we set off across Kansas towards the Rockies. We’re a little cold, but everything is fine.

One thought on “Arkansas and Kansas”